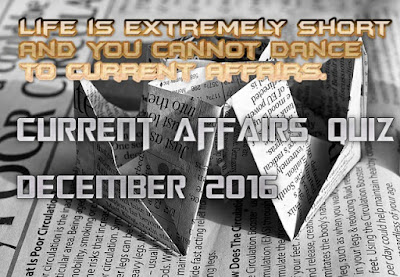 Q1: What is BHIM, launched by PM Narendra Modi?

Q2: Who was unveiled as official face of 2nd International Kite Festival?

Q4: Name the Indian biopics made to Oscars long list.

Q6: In 2015-16 which country became the topmost source of Foreign Direct Investment in India?

Q8: Who was named as the World's Best Playmaker of 2016 by International Federation of Football History & Statistics (IFFHS)?

Q12: Name the batsman who scored triple century against England?

Q13: Name the India's city which registered the highest per capita income for 2015-16.

Q15: Who was appointed as the brand ambassador for Assam Tourism?

Q16: Name the eminent Gandhian and environmentalist and author of the famous book 'Aaj Bhi Khare Hain Talab' who  passed away recently after prolonged illness?

Q17: Who won European Sportsperson of the Year award?

Q18: Who sketched the National Emblem?

1: BHIM (Bharat Interface for Mobile) a mobile based application for the Unified Payment
Interface (UPI) which will be common across all banks and financial institutions.

10: In honour of outgoing US president Obama (Scientific Name of the fish is Tosanoides Obama)

18: Dinanath Bhargava who sketched the National Emblem 'Lion Capital of Ashoka', died at the age of 89 in Indore.