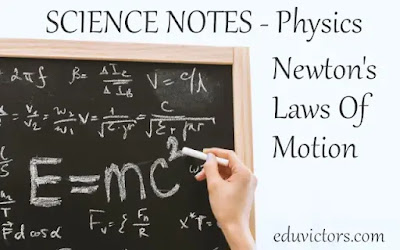 A push or pull is called force. It is a vector quantity. SI Unit of Force is N (Newton). The force applied on a body can bring about the following changes:

• It can change the speed of the body

• It can change the direction of motion of a body

Thus, a force is the external agent that changes the state of rest or uniform motion of a body along a straight line.

This tendency of an object to resist any change in its state of rest or of uniform motion is called inertia.

Inertia can be defined as the property of matter by virtue of which it opposes any change in its state of rest or of uniform motion along a straight line.

• When a bus or train at rest starts, to move suddenly, the passengers sitting in it jerk in backward direction due to their inertia of rest.

• The dust particles come out from a carpet when it is beaten with a stick due to their inertia of rest.

• A passenger jumping out from a rapidly moving bus or train is advised to jump in forward direction and run forward for a short mile due to inertia of rest.

• When a running bus or train stops suddenly, the passengers sitting in it jerk in forward direction due to inertia of motion.

The momentum of a moving body is equal to the product of its mass and its velocity. It is a vector quantity. SI unit is kg m/s.

• The linear momentum of a system of particles remains conserved if the external force acting on the system is zero.

• Rocket propulsion and engine of jet aeroplane works on principle of conservation of linear momentum. In rocket, ejecting gas exerts a forward force which helps in accelerating the rocket upward

The rate of change of momentum of a body is directly proportional to the force applied on it and change in momentum takes place in the direction of applied force.

For every action, there is an equal and opposite reaction and both act on two interacting objects. Rocket is propelled by the principle of Newton’s third law of motion.

Based on such examples of action and reaction forces, Sir Isaac Newton gave the third law of motion “To every action there is an equal and opposite reaction".

A large force which acts on a body for a very short interval of time and produces a large change in its momentum is called an impulsive force.

•  When we kick a football, the kick lasts only for a fraction of a second. The force, which we apply on a football, is an example for impulsive force.

•  A fielder lowers its hand when catching a cricket ball because by lowering his hands, he increases the time of contact for stopping the ball and therefore fielder has to apply lesser force to stop the ball. The ball will also exert lesser force on the hands of the fielder and the fielder will not get hurt.