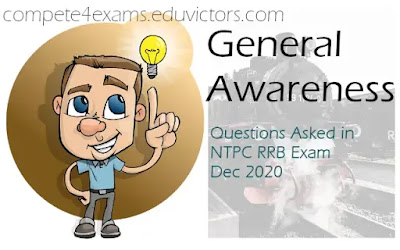 The RRB NTPC is a competitive exam for the non-technical posts conducted by Railway Recruitment Board (RRBs). The full form of NTPC is Non-Technical Popular Categories.

Q3. Rocket launcher made by DRDO?

Q4. Sabrimala Temple is located in?

Q8. Which of the following is not in Delhi?

Q13. Which of the following state is a part of seven sisters?

Ans: The Seven Sister States is a popular term for the contiguous states of Arunachal Pradesh, Assam, Meghalaya, Manipur, Mizoram, Nagaland and Tripura

Q15.Sound can not travel in?

Q17. Pattachitra Painting is of which state?

Q22.Which of the following is a Maharatna Company?

Q23.Dandi Village is in which district of Gujrat?

Q24.Gobi Desert is located at?

Q25. Prarthana Samaj was founded by?

Q27.Which of the following country is not a member of BIMSTEC?

Q28.Pass that joins Srinagar with Leh?

Q31. Environment Protection Act was passed in which year?

Q32. Khalsa Panth was established by?

Q34.State Having the longest Cost line?

Q36. The brain of the Computer?

English Grammar Quiz
History Quiz
Geography Quiz
Q & A On Economics
Q & A On Computers
Q & A On Physics
Q & A On Biology
Q & A On Polity
Q & A On Geography
Q & A On Chemistry
Q & A On History
General Studies Quiz (Aug 2020)
Posted by www.eduvictors.in at 05:30