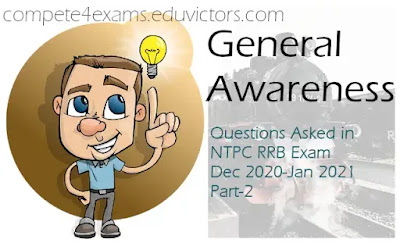 2. Amartya Sen got Nobel prize in which year: 1998 economics

15. Environment Act passed in which year in India:1986

18. Who said "Swaraj is my birthright and I shall have it": Lokmanya Bal Gangadhar Tilak on August 1, 1920, in Mumbai

25. Total Ramsar sites in India updated- 42 (A Ramsar Site is a wetland site designated to be of international importance under the Ramsar Convention. )

29. Rajatarangini was written by: Kalhana

35. What is the SI Unit of Electric Current? : Ampere

39. Which State is not included in Seven sisters? : Sikkim

41. Who is elected as chairman of who executive board? : Dr Harsh Vardhan

43. Trishul Himalaya mountain peak is in which state? : Uttarakhand

44. Europa is the moon of which planet?: Jupiter

47. First Atomic Theory Hypothesis has given by John Dalton