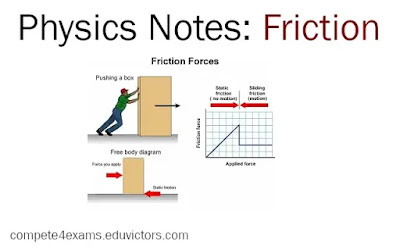 ① Whenever a body moves or tends to move over the surface of another body, a force comes into play that acts parallel to the surface of contact and opposes the relative motion. This opposing force is called friction.

③ Static Friction is the frictional force acting on a body when the body has not started moving yet and is at rest, also this friction is equal to the amount of force applied on the body and is variable to a certain limit.

④ Sliding Friction is the friction acting on the body when it is in motion and this friction is constant and is always less than the maximum value of static friction.

⑤ When a roller rolls over a surface, the frictional force that comes into action is rolling friction.

ⅰ Friction depends on the nature of the surfaces in contact and their state of polish.

ⅱ It acts tangential to the two surfaces in contact and in a direction opposite to the direction of motion of the body.

ⅲ The value of limiting friction is independent of the area of the surface in contact so long as the normal reaction remains the same.

ⅳ The limiting friction (fsmax ) is directly proportional to the normal reaction R between the two surfaces.

⑨ Friction due to gases and liquids is called fluid friction and is also called drag.

⑩ Air exerts the force of friction on all the bodies which move through it and opposes their motion. Shooting stars (Meteors showers) are due to atmospheric friction.

⑪ Friction is a necessary evil.

⑫ The Important methods of reducing friction are:

ⅳ By using rollers and heels.

Q1(MCQ): It is easier to roll a barrel than to pull it because

(d) of a reason other than those mentioned

Q2(MCQ): One finds it more difficult to walk on ice than on a concrete road because

(a) ice is soft and spongy whereas concrete is hard

(c) there is more friction on ice than on concrete

(d) none of these