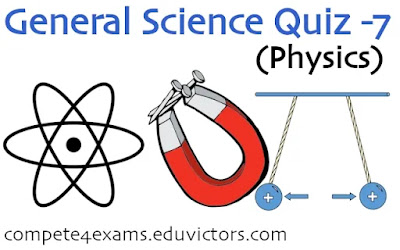 Q1: Desalination of seawater is done by using reverse osmosis.

The pressure applied to the solution is

(a) larger than osmotic pressure

(b) smaller than osmotic pressure

Q2: The unit of power is

Q3: Which one of the following dements is used as a timekeeper in atomic clocks?

Q4: Which one of the instrument is used for locating submerged objects in an ocean?

Q5: Why is argon gas used along with tungsten wire in an electric bulb?

(a) To increase the life of the bulb

(b) To reduce the consumption of electricity

(d) To reduce the cost of the bulb

Q6: As the train starts moving, the head of the passenger sitting inside leans backward because of

(a) Inertia of Rest

(b) Inertia of Motion

Q7: When a piece of  pure silver is doped with aluminium, then

(b) the doped silicon piece will become n-type

(d) the resistivity of the doped silicon piece will increase

Q8: An iron needle floats on the surface of water due to

(a) Upthrust of water

Q9: The reason of mirage is

(a) Interference of light

(b) Diffraction of light

Q10: Which one of the following is not a semiconductor?

Q11: For which one of the following does the centre of mass lie outside the body?

(a) A fountain pen

(b) A cricket ball

1: (a) larger than osmotic pressure

11: (c) A ring (Centre of mass of ring is at its centre which is outside its body)