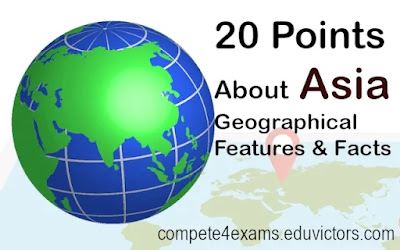 ① Asia is the largest of the world’s continents, covering approximately 30 per cent of the Earth’s land area. The Equator, Tropic of Cancer and Arctic Circle passes through Asia.

③ Asia borders with Europe are not well-defined. Asia is bordered by the Arctic, Pacific, Indian Oceans, the Ural Mountains, the Caucasus Mountains, and the Caspian and Black Seas.

④ Asia can be divided into five major physical regions:

⑤ The Himalayas mountains extend for about 2,500 kilometres (1,550 miles), separating the Indian subcontinent from the rest of Asia.

⑥ The Himalayas are so vast that they are composed of three different mountain belts. The northernmost belt, known as the Great Himalayas, has the highest average elevation at 6,096 meters (20,000 feet). The belt contains nine of the highest peaks in the world, which all reach more than 7,925 meters (26,000 feet) tall. This belt includes the highest mountain summit in the world, Mount Everest, which stands at 8,850 meters (29,035 feet).

⑧ The Ural Mountains run for approximately 2,500 kilometres (1,550 miles) in an indirect north-south line from Russia to Kazakhstan.

⑨ Asia is home to many plateaus. The Iranian plateau covers more than 3.6 million square kilometres (1.4 million square miles), encompassing most of Iran, Afghanistan, and Pakistan.

The Deccan Plateau makes up most of the southern part of India.

⑩ The West Siberian Plain, located in central Russia, is considered one of the world’s largest areas of continuous flatland.

Central Asia is dominated by a steppe landscape, a large area of flat, unfrosted grassland.

Pamir Plateau is known as ‘Roof of the World’ situated in Central Asia.

⑪ Lake Baikal, located in southern Russia, is the deepest lake in the world, reaching a depth of 1,620 meters (5,315 feet)

The Yangtze is the longest river in Asia and the third-longest in the world.

The Tigris and Euphrates Rivers begin in the highlands of eastern Turkey and flow through Syria and Iraq, joining in the city of Qurna, Iraq, before emptying into the Persian Gulf.

⑬ China has such diverse landscapes, from the arid Gobi Desert to the tropical rain forests of Yunnan Province, many flowers can adapt to climates all over the world. That's why botanists refer to China as the 'Mother of Gardens'.

⑭ Lake Baikal’s age and isolation make it a unique biological site. Hundreds of Lake Baikal’s species are endemic, meaning they are found nowhere else on Earth.

⑮ The Bay of Bengal, on the Indian Ocean, is one of the world’s largest tropical marine ecosystems. The bay is home to dozens of marine mammals, including the bottlenose dolphin, spinner dolphin, spotted dolphin, and Bryde’s whale.

⑰ In the Himalayas, communities use yaks as beasts of burden.  In the Mongolian steppe, the two-humped Bactrian camel is the traditional beast of burden.

The deepest trench of the world: Mariana Trench lies in the Pacific Ocean near the Philippines.

⑲ Asia is made up of 49 countries. It is the birthplace of the oldest civilizations of the World, i.e. Indus Valley Civilisation, Mesopotamia, and Chinese Civilization.

Q & A On Geography