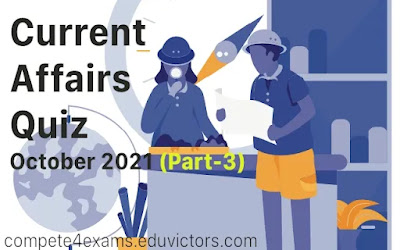 1. Which day goes all over India on 31st October?

2. Which organisation has released the report titled "State of the Climate in Asia"?

3. Prime Minister Narendra Modi has reached which country to attend the G-20 summit?

4. Which country has recently issued the first passport with "X" gender marker?

5. Which social media company has recently changed its corporate name to "META"?

6. Which ministry has launched a market segment named “Green Day Ahead Market (GDAM)?

7. Name the 13-year-old girl from Kashmir (below 14 years of age) who has become the world champion by winning the World Kick Boxing held in Egypt?

8. Who has become the first player in the world to take the fastest (53 matches) 100 wickets in T20 International cricket?

10. The Strategic Forces Command of the Indian Army has conducted the first successful user test of which ballistic missile?

11. Which ministry has launched “Amrit Mahotsav Podcast” on the freedom movement?

12. October 29 is being celebrated all over the world as which day?

13. Nepal's Army Chief General Prabhuram Sharma has been announced to be honored with which honorary title in India?

Answer. Honorary title of General of the Indian Army.

14. Anita Anand of Indian origin has recently become the new Defense Minister of which country?

15. Which state of the country has become the first open defecation free state?

16. When is the World Audio-Visual Heritage Day celebrated?

17. In which Indian city the Radio over Internet Protocol system has been inaugurated?

18. Which Indian state has the largest Scheduled Tribe population?

19. India has recently handed over the Jayanagar-Kurtha rail link to which neighboring country?

21. Which institute has started a magazine named 'Children First: Journal on Children's Lives'?

22. Which Tamil film has been selected by the Film Federation of India to represent India at the 94th Academy Awards?

23. Indian-American journalist Chidananda Rajghatta will launch a book on America's first female Vice President Kamala Harris later this month. What is the name of the book?

24. Which commission has launched a new Digi-Book named “Innovations for You”?

26. According to the report released by which organization and other agency, the glaciers of Africa will disappear soon?

27. In which country Mount Aso volcano has erupted, after which instructions have been issued to the people to remain alert?

28. Name the two Hollywood actors will be presented the Satyajit Ray Lifetime Achievement Award at the 52nd International Film Festival of India?

29. Who has been appointed as the President of Blin Film Festival 2022?

30. Which day is celebrated all over the world on 21st October?