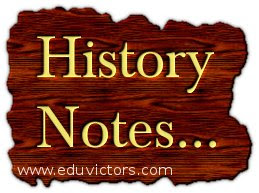 ⑥ Mughal emperor Farrukhsiyar,  in July 1717 granted the English East India Company privilege to train duty free in Bengal in lieu of annual payment of rupees 3000 and rent 38 villages in the vicinity of Calcutta.

⑦ Original name of Ali Vardi Khan was Mirza Muhammad Ali. He became independent subhedar of Bengal 1741. His Attitude towards a European trading companies in Bengal was restricted.

⑧ After the death of alivardi Khan on 10th April 1756 and was succeeded by his grandson Siraj-ud-daula.

⑨ Sirajudullah launched offensive attack against the English, who had made revenue loss to Nawab's treasurey, on 4th June 1756 the factory of English at Kasimbazar was stormed and looted. Fort William was besieged.

⑩ Black hole incident:  It is believed that Sirajudula imprisoned 146 English men in a tiny room. Out of 146 only 23 survived the next morning and the rest of them died of suffocation. The incident was used as a device by East India Company securities to win the support of British public opinion and preparing a base for the war of aggression to follow. Modern historians found the incident partly untrue.

⑪ Robert Clive made a secret floor plot to throw Sirajuddaula. He entered into quick conspiracies with Mir Jafar Manikchand, Nandkumar and yar Latif. In the Battle of Plassey (1757) which decided the fate of the English in Bengal, Siraj Ud daulah was arrested and brutally murdered.

⑫ Mirjafar was appointed as puppet Nawab of Bengal by East India Compmany. Mirjafar died because of Leprosy. Later his son Mir-Qasim was made Navab of Bengal.

⑭ Robert Clive was made Governor of Bengal 2nd time in 1765-67. He concluded the treaty of Allahbad and secured 'Farman' granting revenue authority to East India in Bengal, Bihar and Orrisa. In 1774, on returning to England, he was put on trial before Parliament for plundering the revenues and corruption he did in India. There was a great famine in Bengal between 1769 and 1773, which reduced the population of Bengal by a third. Robert Clive was also blamed for his monoply practices. He committed suicide in 1774.