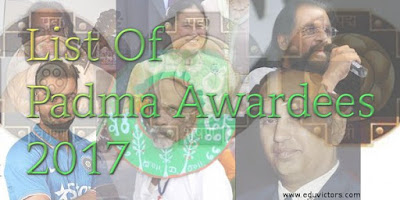 ① Padma Awards - one of the highest civilian Awards of the country, are conferred in three categories, namely,

③ ‘Padma Vibhushan’ is awarded for exceptional and distinguished service;

⑤ The awards are announced on the occasion of Republic Day every year.

⑥ These awards are conferred by the President of India at ceremonial functions which are held at Rashtrapati Bhawan usually around March/ April every year.

⑦ This year the President of India has approved conferment of Padma Awards to 89 persons as per the list  below. The list comprises of:

⑧ 19 of the awardees are women and the list also includes 5 persons from the category of foreigners, NRIs, PIOs and 6 Posthumous awardees