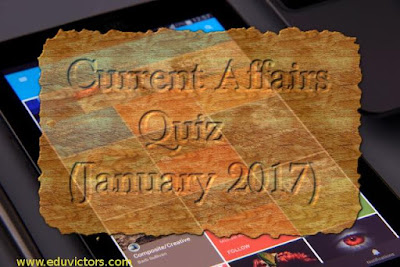 Q8: Which airport has become the first aerodrome in the world to adopt unique performance and benchmarking digital platform, Arc, which helps in tracking and monitoring building performance.

Q9: Which day is celebrated as Army Day in India?

Q10: Who bagged the Best Actor Award in Filmfare Awards 2017, held on January 14 at the NSCI Dome in Worli, Mumbai?

Q11: Olympic and Paralympic medals for the Tokyo 2020 Games will be made from which materials.

Q12: Prime Minister Narendra Modi had announced the setting up of a task force which will help plan for the “effective participation” of Indian sportspersons in the next three Olympics — in 2020, 2024 and 2028. Name the badminton player who became the part of the task force?

Q14: Who was appointed as the new Director of the Central Bureau of Investigation?

Q15: Name the actor/actress who wins her 2nd People's Choice Award for her role in Hollywood TV serial?

Q16: Which movie landed a record-tying 14 nominations to the Academy Awards, for the forth coming Oscars?

Q20: When will the General Anti Avoidance Rule (GAAR) be effective?

Q21: After nearly 114 years, scientists from Zoological Survey of India (ZSI) have recently discovered two new species of marine flatworms in Andaman and Nicobar Islands. These newly discovered species are named as _____?

Q24: Name the celebrities who were selected for Padma Vibhushan award posthumously?

Q25: Who will be appointed as next US Ambassador to United Nations?