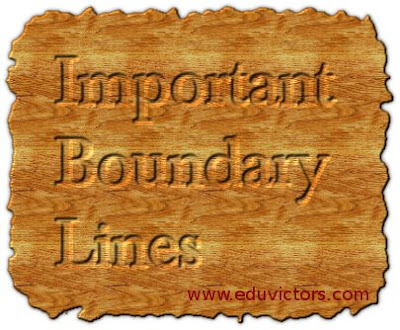 Mannerheim Line:
Drawn by General Mannerheim; fortification on the Russia an Finland border.

McMahon Line:
The boundary between India and China as demarcated by Sir Henry McMahon in 1914. China does not recognise this line.

Radcliffe Line:
Drawn by Sir Cyril Radcliffe in 1947 as demarcation between India and Pakistan.

Seigfrid Line:
Line of fortification drawn by Germany on its border with France.

17th Parallel:
The line which defined the boundary between North Vietnam and South Vietnam before the two were united.

24th Parallel:
The line which Pakistan claims should be the demarcation between India and Pakistan.