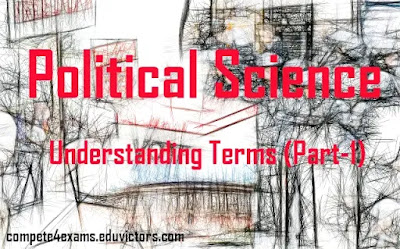 A condition under which the freedom of expression is taken away. Citizens have to take prior permission from the censor authorities of the government for making a speech or publishing news and views. Anything that the government finds objectionable cannot be published.

An alliance of people, associations, parties or nations. This alliance may be temporary or a matter of convenience.

Territory under the immediate political control of another state.

A state governed by a communist party without allowing other parties to compete for power. The state controls all the big property and industry.

A coup d’état (pronounced ku de’ta), or simply a coup, is the sudden overthrow of a government illegally. It may or may not be violent in nature. The term is French for ‘a sudden blow or strike to a state’.

A system of rules that takes effect when a military authority takes control of the normal administration of justice.

Persons held in prison or otherwise detained, perhaps under house arrest, because a government considers their ideas, image or activities as a threat to the authority of the state. Often exaggerated or false cases are foisted on them and they are kept in detention without following normal law.

A direct vote in which an entire electorate is asked to either accept or reject a particular proposal. This may be adoption of a new constitution, a law or a specific governmental policy.

Mass refusal by workers or employees to perform work due to certain grievances or because of demands not met. In most democratic countries the right to strike is legal.

An association of workers for the purpose of maintaining or improving the conditions of their employment.

The right of a person, party or nation to stop a certain decision or law. The word comes from Latin, which means ‘I forbid’. A veto gives unlimited power to stop a decision, but not to adopt one.

Schedule to the Constitution