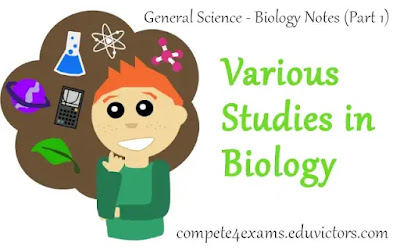 Biology- Biology is often called the science of life in studies that include everything from an organism’s conception to its death. It is mainly concerned with the study of living systems.

• Botany - study of different aspects of plants. Theophrastus is known as father of Botany.

• Zoology - study of various aspects of animals. Aristotle is called Father of Biology as well as Zoology.

• Agronomy- Science of soil management and production of crop.

• Anthropology- Study of origin, development and relationship between the culture of past and present human.

• Angiology- Study of blood vascular system including arteries and veins.

• Biochemistry - Study of compounds and chemical reactions that take place in living organisms.

• Biophysicist—Study of living things that use the techniques and tools used in the field of physics.

• Biotechnology- Technology connected with living being for wilful manipulation on molecular level.

• Cryobiology – It is the study of effect of low temperature on organisms and their preservation.

• Clone – Clones are genetically identical individuals in a population.

• Dendrochronology- Counting and analyzing annual growth rings of tree to know its age.

• Ecology – Study of inter- relationship between living and their environment.

• Evolution- Study of origin of life, variation and formation of new species.

• Embryology- It is the study of fertilization and development if zygote.

• Eugenics – Study of factors connected with the improvement of race.

• Euthenics – Treatment of defective in heredity through genetics engineering.

• Ethnology – Study of science dealing with different races of human.

• Exobiology- Study of possibility of life in space.

• Floriculture- Cultivation of plant for their flower.

• Forestry- Development and management of forest.

• Fermentation- process of incomplete oxidation that occur in microbes and other cells in absence of oxygen, leading to the for nation of ethyl alcohol.

• Gastroenterology- Study of alimentary canal or stomach, intestine and their disease.

• Genetics- Study of variation and transmission of characters from parents to their young ones.

• Gnotobiotics—Studies how organisms grow in a germ-free environment or studies organisms that grow in environments with certain specific germs.

• Growth – Permanent increase in the weight and volume or size of an organism.

• Hypertonic- when two solution have differcut sdute concentration. The sol at ion which have higher concentration is called hypertonic.

• Hypotonic- in two solation which have lawer solute con centration is called hypotonic.

• Histology- Study of tissue with the help of microscope.

• Hydroponics- Study of growing plant without soil in water which contain nutrient.

• Immunology - Study of immunity or resistance of body to disease.

• Limnology - Study of organisms that live in freshwater areas.

• Marine biology - Study of life life in the ocean (usually specific organisms, such as squid or sharks).

• Mammography – Brach of science which deal test of breast cancer.

• Monoecious- Plant which have both male and female flower.

• Molecualr biology- Study of molecule found in the body of living organism.

• Osmosis- movement of water moledcule across semipermeable membrane from the region of its higher concentration to the region of lower communication.

• Odontology- Study of teeth and gum.

• Oncology- Study of cancer and tumours.

• Obstetrics- Science connected with care of pregnant woman before, during and after child birth.

• Oology—Study of bird eggs, including the development of eggs from certain types of birds.

• Orthopaedics- Diagnosis and repair of disorders of locomotery system.

• Phytoplanktons- Microscopic organism which passively float on the surface of water.

• Parasite- organism which depend on other living for their food and shelter.

• Poikilothermic- Organism which change their body temperature according to surrounding. These are also called cold blooded animal.

• Paleontology — Study of prehistoric life (also this is a field of geology.)

• Parasitology — Study of the life cycle of parasites.

• Taxonomy — Study of classification of organisms.

• Virology — Study of development of viruses and how they affect other organisms.