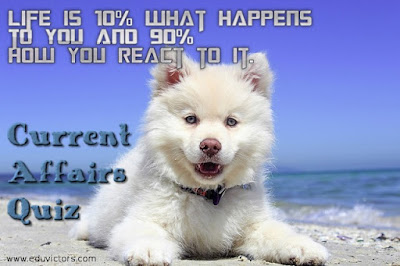 Q2: Name the country which launched bond notes equivalent to US Dollars?

Q3: Whose 158th birthday was commemorated by Google Doodle for his contribution in radio waves communications? (Hint: An Indian physicst)

Q5: Name the third Indian cricketer ever to register over 500 runs and take more than 50 wickets in a calendar year?

Q6: Name the Indian golfer who is the first one to win the Ladies European Tour, 2016?

Q8: Who is the new Prime Minister Of South Korea?

Q9: Which Indian racer is among the category winners in the Malaysian Rally Championship-2016 of the Asia Pacific Rally?

Q10: Which is the longest running Bollywood film in India?

Q11: "Playing It My Way" is the autobiography of which Indian celebrity?

Q13: What was the theme of 36th India International Trade Fair?

Q14: Who won the Stefan Edberg Sportsmanship Award 2016 at the ATP awards?

Q16: Samvidhan Diwas or the Constitution Day of India is observed on which day?

Q17: Who has been named as the UN ambassador by US President Donald Trump?

Q18: Name the Indian golfer who won the Indonesia Open 2016?

Q19: Which computer has gained the first position in the Top 500 list of the world's fastest computers?

Q21: Which airlines has been named the best airline in the world for the year 2016 in in its Airline Excellence Awards?