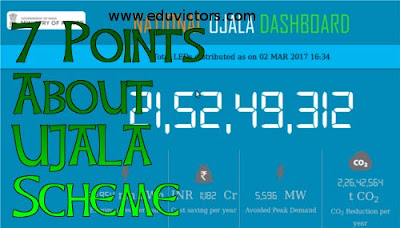 
③ The UJALA scheme is being implemented by Energy Efficiency Services Limited (EESL), a joint venture of PSUs under union ministry of power.


④ The scheme was initially labelled DELP (Domestic Efficient Lighting Program) and was relaunched as UJALA.


⑤ Under the scheme, every domestic household having a metered connection from their respective Electricity Distribution Company is eligible to get the LED bulbs. UJALA LED bulbs can be purchased at a price between INR 75- INR 95 per LED bulb, subsidised state-wise.


⑥ The union government has launched a online dashboard (www.ujala.gov.in) showing how many distributions of LEDs have taken place and how much energy is saved.


⑦ It is expected there will be 24 crore units of energy be saved every year.