Folk Dances of Andhra and Telangana 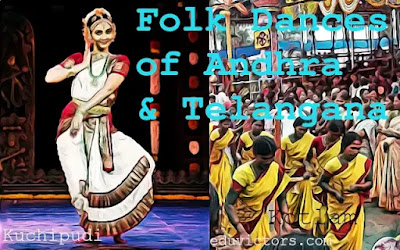 One of the eight major Indian classical dances.

Originated in a village named Kuchipudi in the Indian state of Andhra Pradesh.

This traditional dance form has a history of 2000 years.

It was lost in the Mughal and British era.

An oral storytelling technique in the Katha tradition,

It is performed in villages of Andhra Pradesh and Telangana.

Also called dance of the brave.

An ancient form of dance with associated religious significance.

It started as a ritual to be performed in Shiva temples in honour of Lord Shiva.

One of the most famous and popular dance forms of Andhra Pradesh.

It is a mask dance that originated in Tanaku in the West Godavari district of the state.

It is the shadow puppet theatre tradition of Andhra.

A complementary to the Dandora Dance in North India.

Performed in the coastal area of Andhra Pradesh this dance is also known as Tapetta.

A kind of Folk Dance that derives it origin from the folk cultures in India.

Performed by the banjaras, a semi-nomadic tribe.

It is one of the most popular dance in Andhra Pradesh.