7 Key Points You Should Know About Atal Bhujal Yojana 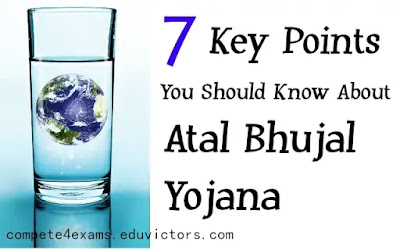 ① Atal Bhujal, Yojana has been launched with an aim to raise the groundwater level in those areas where it has significantly declined.

② Atal Bhujal Yojana (ATAL JAL) is a Central Sector Scheme for facilitating sustainable groundwater management with an outlay of INR 6000 crore. Out of this, INR 3,000 crore will be as a loan from the World Bank and INR 3,000 crore as matching contribution from the Government of India (GoI).

④ The objective of the scheme is to increase the level of groundwater,  would provide benefits to the farmers.

⑥ PM Narendra Modi said that a provision has been made in the Atal Jal Yojana to encourage Gram Panchayats to perform better in water management.

⑦  The government has set a target to provide clean drinking water facility to 15 crore rural households in the next five years.