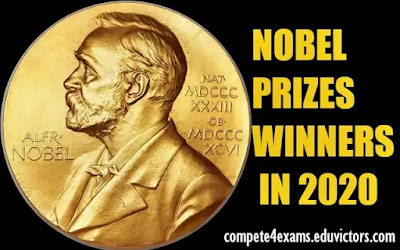 The Nobel Prizes regarded as the most prestigious awards given for intellectual achievement in Physics, Chemistry, Medicine, Literature, Economics, and a distinguished achievement towards humanity.

Nobel Prize award was first conferred in 1901. It is based on the fortune of Alfred Nobel who was a chemist, engineer, inventor and entrepreneur.

The 2020 Nobel Prizes in various fields were announced in October 2020.

Two Americans and One British — Harvey J Alter, Charles M Rice and Michael Houghton have been awarded the Nobel Prize for the discovery of Hepatitis C which was discovered in 1982 by screening millions of DNA samples.

Three astrophysicists were awarded. They are:

Roger Penrose (UK) discovered that black hole formation is a robust prediction of the general theory of relativity.

Reinhard Genzel and Andrea Ghez received the second half of the prize for the discovery of a supermassive black hole at the centre of the Milkyway galaxy, now known to be the Sagittarius A.

"A person or organisation who is awarded the Nobel Prize is known as Nobel Laureate."

Emmanuelle Charpentier and Jennifer A. Doudna received the prestigious award for discovering the method for genome editing.

World Food Programme (WFP), a UN agency, was chosen for its efforts to combat hunger, especially in war-affected areas where hunger is used as a weapon to inflict war and conflict.  Primarily the WFP works on 'Eradicating Hunger' programmes worldwide.

American economists, Paul Milgrom and Robert Wilson have been awarded for their contributions to auction theory and inventions of new auction formats.