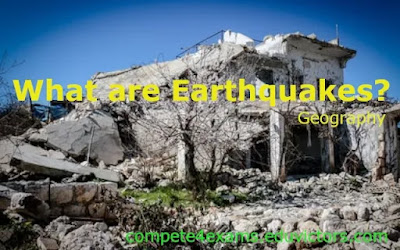 So what exactly are they ? Well the earths outer layer is made up of a thin crust divided into a number of plates. The edges of these plates are referred to as boundaries and it’s at these boundaries that the plates collide, slide and rub against each other. Over time when the pressure at the plate edges gets too much, something has to give which results in the sudden and often violent tremblings we know as earthquakes.  The collision will continue as long as relative motion continues between the plates. This type of collision is characterised by frequent, often very destructive earthquakes. In mountains, earthquakes are the most important triggers of landslides and debris flows.

As human population grows, and is more concentrated in cities, often along coastal areas and floodplains, a larger number of people are vulnerable to environmental hazards such as earthquakes, sea-level rise and tsunamis.

Approximately 90% of the world’s earthquakes occur in the area around Pacific basin.

The strength of an earthquake is measured using a machine called a seismograph. It records the trembling of the ground and scientists are able to measure the exact power of the quake via a scale known as the richter scale. The numbers range from 1-10 with 1 being a minor earthquake (happen multiple times per day and in most case we don’t even feel them) and 7-10 being the stronger quakes (happen around once every 10-20 years). Seismograph of the magnitude 9.3 earthquake recorded on 26 December 2004.

Q & A On Geography