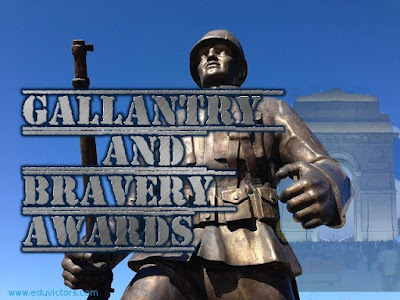 Recognition of bravery and gallant has always been a very prestigious affair. The government of India recognise brave civilians and military personnel and grant the following gallantry awards:

The highest award for bravery or some daring and a pre-eminent act of valour or self-sacrifice in the presence of the enemy whether on land, at sea or in the air. 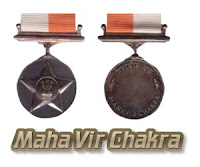 It is the second highest decoration and is awarded for acts of conspicuous gallantry in the presence of the enemy whether on land at sea or in the air.

It is the 3rd highest in order of the awards given for acts of gallantry in the presence of enemy whether on land, at sea or in the air.

Ashok Chakra is awarded for the most conspicuous bravery or some daring or pre-eminent act of valour or self-sacrifice on land at, at sea or in the air but not in the presence of an enemy.

This is awarded for gallantry other than in the face of the enemy. This award may be granted to civilians or to military personnel and may be awarded posthumously.

It is awarded to personal of all the three services in class I, II and III in recognition of distinguished service of the "most exceptional" and "exceptional" and a high order respectively. Prefixes like 'Parma' and 'Ati' are added before the first two categories of medals respectively.

The Jeevan Raksha Padak Series of awards are given for courage and promptitude under circumstances of great danger to the life or bodily injury of the rescuer, displayed in an act or a series of acts of human nature, in saving a life from drowning, fire, rescue operations in mines, etc.