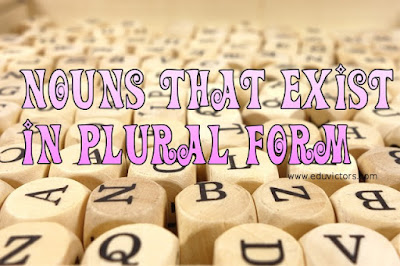 Plural because of many parts – no singular

(ii) Instruments having two inseparable parts
bellows, compasses, nutcrackers, pliers, pincers, scissors, shears, snuffers, tongs, forceps
‘Forceps’ is a Latin noun and its Latin plural is  ‘forcipes”. Its English plural was ‘forcepses’, but now ‘forceps’ is used as both singular and plural.

Singular nouns ‘card’ ‘ billiard’ and ‘domino’ are pieces used in those games.


Other Words which are always Plural

ashes: the remains of a human body after cremation.

alms: charity (also use as singular)

eaves: overhanging edge of a roof

remains: what remains over

stairs: a flight of steps; ‘stair’ is one step

thanks: a good feeling

tidings: used both as singular and plural

wages: usually plural. but we also have ‘a living wage’

wares: articles, a person etc. has for sale.