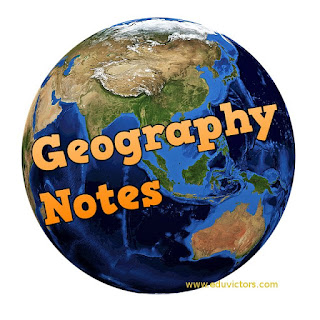 
Barhara (Tribes):
The Barhara tribes mentioned in the Mahabharata who had settled in the north-western regions of India, are associated with—
(1) Ambashthas (a mixed Mongolian Aryan race);
(2) Gandharas (Afghans);
(3) Pavas.

Bhabhar region:
in south of the Shivaliks, is an example of Piedmont situation i.e., belonging to or related to the foot of a mountain.

Bushmen (Tribes):
They live in the Kalahari desert. They are probably the descendants of the earliest inhabitants of Africa. They rank among the most uncivilized and backward peoples in the world. Their food consists almost entirely of meat, often raw or decomposed, and in times of scarcity they will eat insects, snakes etc.

Chinook:
Warm, dry wind experienced along the eastern side of the Rocky Mountains in Canada and the U.S.A.

Climograph:
is a graphical representation of the differentiation between various types of climate. It reveals the type of climate at a glance—a climograph showing wet bulb temperatures and relative humidities  which are  high, for instance, depicts a constantly hot damp climate.

Coastline of India (Length):
The length of India’s coastline is 7,516 km and its territory includes 1,256 islands. Tamil Nadu has the longest coastline in India.

Cosmic year:
One cosmic year is equal to the time taken by the sun to complete one orbit around the galactic centre.
Cotopaxi: is the highest volcano in the world. It is situated in Ecuador.

Doldrums Belt:
is a zone of the tropics where the calm lasting for some weeks prevails, broken at times by erratic squalls and baffling winds. It is an area of low pressure. The wind system in the Equatorial areas is known as doldrums.

Dust Devil:
is a dusty whirlwind normally a few feet in diameter and about 100 feet tall, sometimes also wider and higher.

Earth mass:
The mass of the earth is about 81 times that of the moon.

Earth’s core:
is mainly composed of iron and nickel. Lithosphere is the innermost layer of the earth.

El Nino:
is the weather phenomenon brewing in the tropical Pacific Ocean. It is the largest climate event of the 20th century setting off more global disasters than ever before. El Nino is warming of the waters off Equatorial South America which causes climate abnormalities around the world. The impact can be flooding drought in California, Brazil, Africa and Australia, severe storms in the Central Pacific and a decline in hurricanes hitting the south-eastern United States.

Exfoliation:
This type of weathering is common both in the cold as well as in the hot climate regions.

Garo (Tribes):
Garos are the tribe of Garo Hills in Meghalaya.

Horse Latitudes:
Sub-tropical belts of high atmospheric pressure over the oceans situated in both hemispheres. These are called Belts of Calm between regions of the Trade Winds and Westerlies of higher latitudes.

Hydroponics:
means cultivation of the plants without use of soil.