7 Points You Must Know About Atal Tunnel 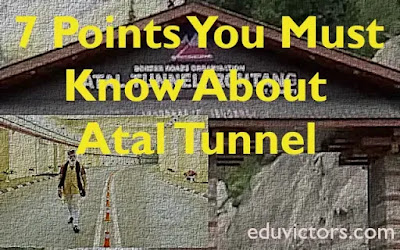 ② About ₹3,200 crores were spent on its construction. Initially it was estimated to be around Rs 1400 crore. The construction of the Tunnel delayed about five years due to the leakage of water from Seri river.

③ In 2000, a strategically decision was made to build up a tunnel under Rohtang Pass, during the tenure of former Prime Mihist Bihari Vajpayee. The foundation stone of the road connect the southern part of the tunnel was laid on 26 May, 2002.

④ Border Roads Organization (BRO) constructed the tunnel and the work was completed by September 2020.

⑤ At a length of 9.02 km, it is the longest tunnel above 10,000 feet (3,048 m) in the world. It connects remote areas of Lahaul and Spiti valley to the nation even in adverse climate conditions. It also reduces the distance of Manali and Leh by 46 kilometers.

⑦ The tunnel was inaugurated by the Prime Minister, Narendra Modi on 3 October 2020

10 Points You Should Know About PM Kisan Samman Nidhi (PM-KISAN) Scheme
Posted by www.eduvictors.in at 19:14