10 Points You Must Know About UN Paris Climate Agreement 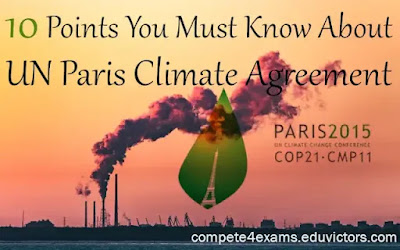 ① The Paris Agreement is an international treaty (legal binding) on climate change which was adopted by 196 nations at COP 21 in Paris, on December 12, 2015.

③ The agreement is all about to reduce global warming to well below 2, preferably to 1.5 degrees Celsius, when compared to pre-industrial levels.

④ To achieve this goal, all signed parties (nations) need to reduce greenhouse gas emissions as soon as possible to achieve a climate-neutral world by mid-century.

⑦ Starting 2024, countries will start reporting their progress by establishing an enhanced transparency framework (ETF). It will act as feedback for the next five-year climate action plan (NDC).

⑨ The Ministry of Environment, Forest and Climate Change (MoEFCC) has constituted a top-level Committee for Implementation of the Paris Agreement (AIPA). It is an inter-ministerial committee.

⑩ AIPA will generate and monitor the progress of implementation of its Nationally Determined Contributions (NDC) action plan. It will also regulate carbon markets in India under Article 6 of the Paris Agreement and will formulate guidelines for carbon pricing.