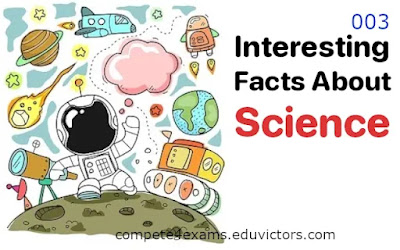 4. Decibel is the unit of measuring the intensity of a sound.

5. The red light is scattered the least and the violet is scattered the most. That’s why red signals are used to indicate dangers. Such a signal appears to be visible to large distances without an appreciable loss due to scattering.

6. ICE AGES are periods of time when Earth’s climate is cold enough for sheets of ice to cover large areas of the planet.

7. Human HEART beats 100,000 times every day and is the only muscle that never rests.

8. Sometimes we look at colours in the region of black and white. These colours are called phantom colours. It can be observed on black and white TV sometimes when pictures pass very rapidly.

9. When we touch a piece of iron and wood placed in the same room, we feel iron to be colder than the wood the reason behind it is good conduction of heat by the iron.

11. Some mushrooms are edible, but many are poisonous. Some contain a chemical called psilocybin that can cause hallucinations.

15. Vehicles have an instrument called a speedometer. It records the speed directly in km/h. There is also another meter that measures the distance moved by the vehicle. This meter is known as an odometer.