7 Points About Project Rhino That You Should Know 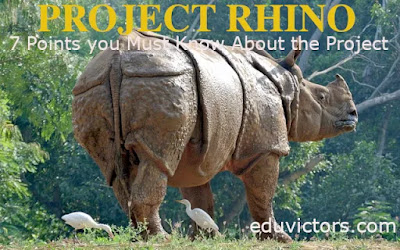 ➁ Project Rhino was launched in 2005 as an ambitious effort to attain a wild population of at least 3,000 greater one-horned rhinos spread over seven protected areas in the Indian state of Assam.

➂ International Rhino Fund has partnered with the Assam Forest Department, the Bodoland Territorial Council, the World Wide Fund for Nature (WWF), and the US Fish & Wildlife Service to address the threats facing Indian rhinos.

➃ To protect rhinos they are moved to safer habitat like Kaziranga National Park and Pabitora Wildlife Sanctuary, where they can breed.

➄ Along with continuing strict protection and community engagement, spreading Indian rhinos out among more protected areas will create a larger, safer and more stable population.

➆ At present, there are about 2,600 Indian rhinos in India, with more than 90% of the population concentrated in Assam’s Kaziranga National Park.