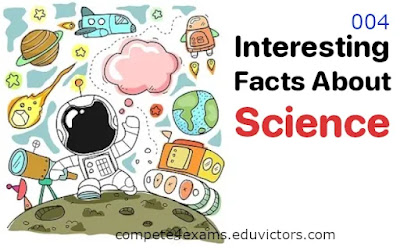 1. Heat Science is known as Pyrology.

2. The cloudless night is colder than the clouded night because of the radiation of heat.

3. Alcohol is used in thermometers in place of mercury in cold regions because the freezing point of it is very low.

4. Theoretically there is no limit of maximum temperature but there is a limit or restriction on the lower temperature. The lowermost temperature is — 273.15°C and it is called absolute temperature.

5. Solar cell – solar cell is basically made of a p-n junction. It is used to convert solar energy into electrical energy.

7. There are more bacteria in your mouth than there are people in the whole world!

8. There is enough acid in the human digestive system to dissolve an iron nail completely.

9. The stomach stores the food for 4-5 hours. The food mixes thoroughly with the acidic gastric juice of the stomach by the churning movements of its muscular wall.

10. Haemoglobin is a red coloured iron-containing pigment present in the RBCs.

11. Homing pigeons use the Earth’s magnetic field to help them find their way home.

12. The Sun accounts for 98 per cent of the mass of the Solar System.

13. Pancreas is a composite gland that acts as both exocrine and endocrine glands.

15. Aeromicrobiology covers a speciality concerned with the types and numbers of microorganisms in the air.