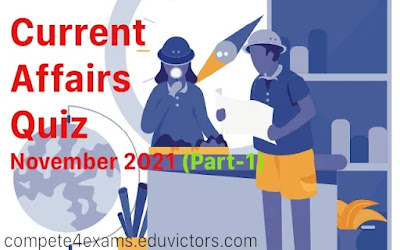 Q1. Who has become the Chief of Staff of Western Naval Command?

Q2. According to the survey of Approval Rating Agency, who among the various leaders of the world has got the first place in the survey?

Q3. Novak Djokovic, the world's number one tennis player, has won the 37th title of his career by winning which title?

Q4. Who got the Nelson Mandela Nobel Peace Prize 2021?

Q5. Where in India's first drive-in rooftop theater has been commissioned and which is the first film to be screened there?

Q6. Who has been awarded the Nelson Mandela Peace Prize (for playback singing and acting) with an honorary doctorate?

Q7. November 8 is being celebrated as which day all over the world as?

Q8. In November 2021, who has become the first woman coach in men's professional franchise cricket?

Q9: In November 2021, who has introduced his new book titled “The Sage with Two Horns: Unusual Tales from Mythology”?

Q12. In which city of India, the record of lighting 9,41,551 lamps simultaneously has been recorded in the Guinness Book of World recently?

Q14. Which country has recently test-fired the Inflatable Missile Detection System on a large scale?

Q15. November 07 is being celebrated all over the world as which day?

Q16. Which country has approved Merck's anti-viral pill, which is considered useful in the treatment of corona infection?

Q17. Who has been appointed by the BCCI as the head coach of the Indian men's team?

Q19. Which South African writer has been awarded the Booker Prize 2021 for his book “The Promise”?

Q21. Which country has recently approved the Pfizer vaccine for children aged 5 to 11?

Q22. Which state government has announced to provide complete exemption in Electric and Motor Vehicle Tax and Registration Fee?

Q23. Who has been conferred with the Ezhuthachan Award 2021 given by the Kerala Sahitya Akademi?

Q24. When is World Vegetarian Day celebrated every year?

Q25. Which one special train has been inaugurated by the Railways to clear the extra rush of passengers during the festive season?

Q26. Which state of the country has topped the Energy Efficiency Index 2020?

Q27. Who has taken over as the Commandant of the National Defense Academy?

Q28. Which day goes all over India on 31st October?