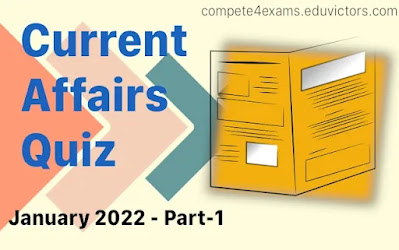 1. Government of which country has resigned amid protests against a sharp increase in fuel prices?

2. Name the American actor who was the first Black actor to win the best actor Academy Award, died at 94.

3.  Name the water metro project for which the first battery-operated electric boat has been built?

4. Who has been appointed as the new Chairman and Chief Executive Officer of the Railway Board?

5. Which country has test-fired around 10 new Tsirkon missiles from a frigate?

6. Which country has opened the world's longest metro line with a total length of 831 km?

7. Which country officially bans the use of plastic packaging for large vegetables and fruits, such as cucumbers, carrots, and bananas?

8. Which country reported the world's first case of "florona", which is believed to be a double infection of COVID-19 and influenza?

9.  Recently who has received the Mumbai Press Club's RedInk Award 2020?

12. Which state has achieved the target of administering the first dose of Kovid to 100% of the population?

13. The person best known as "He-Man" artist and toy designer has passed away.

14. Who has been appointed as the new Permanent Representative of India to the United Nations Conference on Disarmament?