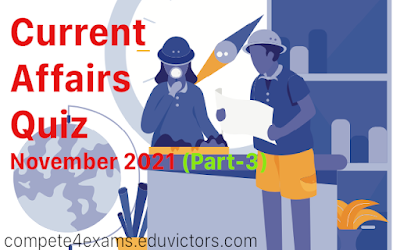 1. Sohan Roy, a Forbes-listed entrepreneur from Kerala has now become the first Indian who has been awarded the honorary title of 'Knight of Parte Guelfa' in Italy.

4. Petr Fiala has been sworn in as the new Prime Minister of the Czech Republic.

5. According to the report of Brandz India 2021 released by Kantar Group media, Amazon has been ranked first in the technology ranking?

6. India's mountaineer Harshwanti Bisht from Uttarakhand state has become the first woman president of the Mountaineering Foundation of India?

7. Lingui, The Sacred Bonds, a drama film has won the ICFT-UNESCO Gandhi Medal at the 52nd edition of IFFI.

9. Barbados has become the World’s newest republic, around 400 years after it became a British colony. Highlights Barbados, the Caribbean Island nation, removed Queen Elizabeth II as the head of the state. Dame Sandra Prunella Mason took over as the President of Barbados.

11. Shillong’s famous Cherry Blossom Festival 2021 was held from November 25 to 27, 2021 in Meghalaya. Highlights Cherry Blossom is a three-day festival, held annually. It was inaugurated by Chief Minister of Meghalaya, Conrad K Sangma and Satoshi Suzuki who is Ambassador of Japan to India.

13. World’s tallest rail bridge pier will soon come up in the North-eastern state of Manipur. Key Points This bridge is being constructed by Indian Railways at Noney Valley in Manipur. The bridge is having a height of 141 metres.

14. Indian Parliament passed the Farm Laws Repeal Bill, 2021 during the first day of the winter session.

15. India1 Payments has crossed a milestone on deploying 10000 white-label ATMs, which was called as “India1ATMs”.

20. National Milk Day is celebrated on November 26, every year.

21. Constitution Day (India's) is celebrated on November 26, every year.

22. The Hubble Telescope has observed “Prawn Nebula”, which is a massive stellar nursery located around 6,000 light-years away in the Scorpius constellation.