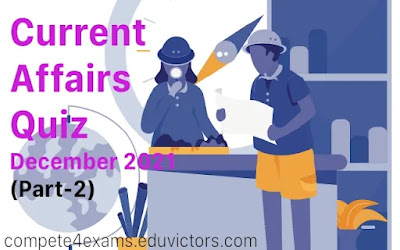 Q1: Which state government has announced a 1% reservation for transgenders in the police?

Q2: Which cabinet has approved the establishment of the first Teachers University?

Q4: In which country a 66 million-year-old dinosaur embryo has been discovered?

Q6: NASA has released the sound recorded by the Juno mission near which planet's moon Ganymede?

Q7: Name the female tennis player who has won the BBC's Sports Personality of the Year 2021?

Q8: National Mathematics Day is celebrated all over India on ________.

Q9: Vice President M Venkaiah Naidu has released a Telugu book titled "Gandhi Topi Governor". The book is based on whose life?

Q12: Which e-commerce company has been fined Rs 200 crore by the Competition Commission of India?

Q13: World Health Organization has approved the emergency use of which vaccine for children?

Q14: Name the Solar Probe of NASA that has entered the Sun's upper atmosphere for the first time in history?

Q16: Which race car diver has been knighted at Windsor Castle, London?

Q17: According to the "Basic Literacy Index", which state ranks first in the list of large states in the list of literacy rates among children below the age of 10 years in the country?

Q19: The Sports Journalists Federation of India has announced to honour which sportsperson with the prestigious SJFI Award?

Q20: The Chief of the Army Staff who has taken over as the Chairman of the "Chief of Staff Committee" today?

Q21: Which United Nations organization has given heritage status to the Durga Puja festival of West Bengal?

Q22: The Union Cabinet has announced to increase the age of marriage of a woman to how many years under the law?

Q23: The government of which country has become the first government in the world to go 100% paperless?

Q24: Which country's National Unity Government has officially approved the use of "Tether" cryptocurrency?

Q25: Who has been named as the Person of the Year by Time Magazine?

Q26: Which country has become the first country in the European Union to legalize cannabis for home and personal use?

Q27: Who has launched "Conyok 2021-22" in partnership with Bharti Foundation?

Q28: Which country has become the first country in the world to have a working week of four and a half days?

Q30: When is the National Energy Conservation Day celebrated?

Q31: Name the Indian mathematician who has been awarded the 2021 DST-ICTP-IMU Ramanujan Prize?