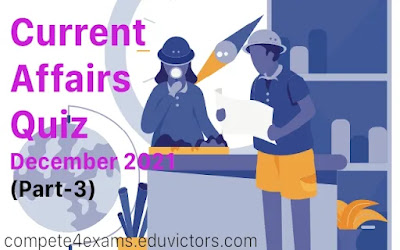 Q1: The US space agency NASA announced the launch of "Psyche Mission" scheduled on?

Q2: Which bank has won the CII DX Award for “Most Innovative Best Practice” 2021?

Q3: Who has been elected by the International Automobile Federation to succeed Jean Todt as the first non-European President?

Q5: Desmond Tutu of South Africa, who fought against apartheid, died, he was _____ years old?

Q6: From which state the central government has constituted a panel to remove AFSPA?

Q7: Scientists of which University of Switzerland have discovered a new layer of human jaw muscles?

Q8: Paytm Payments Bank has partnered with which company to send money in real-time to Paytm Wallet users in India?

Q9: After how many years of service, India's first indigenously built missile corvette INS Khukri has been decommissioned?

Q10:  Which team has won the Under-19 Asia Cup by defeating India?

Q11: Who has been conferred the Mother Teresa Memorial Award for Social Justice 2021?

Q13: Which country has fined Google, the largest search engine, worth of 9.8  crores of rupees for failing to remove illegal content?

Q14: Who has been awarded the Journalist of the Year Award posthumously by the Mumbai Press Club for the year 2020?

Q15: By which year the European country Belgium has announced the closure of all its seven nuclear power plants?

Q16: The Food and Drug Administration has approved Apravude injections to prevent which disease?